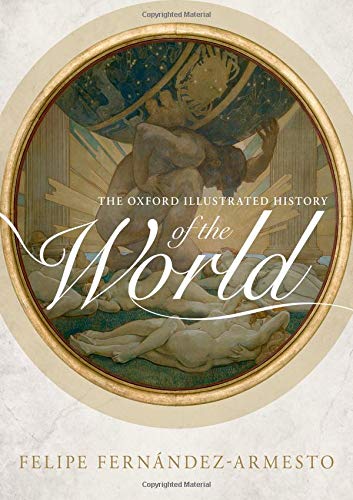 The Oxford Illustrated History of the World por Felipe Fernández-Armesto

Felipe Fernández-Armesto con The Oxford Illustrated History of the World

Críticas To say that The Oxford Illustrated History Of The World is a monumental undertaking is something of an understatement. In just over 400 pages some of the world's most noted historians come together to tell the story of human history, from its first breath to the modern age ... The result is a triumph ... The Oxford Illustrated History Of The World is lavishly illustrated with photographs, maps and wherever necessary tables and diagrams, and the balance of text versus illustration is just right. As accessible as it is well-researched, it really is a joy to read and will satisfy anyone who wants to delve deeper into the history of the world. (All About History)Extraordinary ... [A] beautiful book, with accessible essays of such originality and scholarly depth a treasure house of startling images. (Richard Drayton, Times Literary Supplement)Some books are admirable because of their sheer scope and ambition, and this overview of the entirety of the human story fits firmly within that category. (History Revealed)Condensing the story of humanity's 200,000 year tenure on Earth into 450 pages (including pictures) could be an act of hubris or the result of orderly - yet imaginative - minds making connections across centuries and continents. The Oxford Illustrated History of the World is more the latter... a pleasure to read with many thought-provoking passages. (David Luhrssen, Shepherd Express)Are you intellectually curious, but very busy? Would you have liked to understand the biggest questions about the history of the last 200,000 years, but you don't have the time required to read 97 different fat books to tell you the answers? Are you looking for just one book that will summarize it all? Then this is your book! It's exciting, up-to-date, and well-written. You'll love it! (Jared Diamond, Professor of Geography at UCLA and Pulitzer-Prize-winning author of Guns, Germs, and Steel and The World Until Yesterday)Felipe Fernández-Armesto and his gifted team have produced the world history for our times, ecologically oriented, written from multiple standpoints and informed by systematic comparison. (Peter Burke, Professor Emeritus of Cultural History, University of Cambridge)A truly remarkable book. (Richard Lofthouse, Quad Magazine)brilliant and provocative (Art Eyewitness) Reseña del editor Imagine the planet, as if from an immense distance of time and space, as a galactic observer might see it―with the kind of objectivity that we, who are enmeshed in our history, can´t attain. The Oxford Illustrated History of the World encompasses the whole span of human history. It brings together some of the world's leading historians, under the expert guidance of Felipe Fernandez-Armesto, to tell the 200,000-year story of our world, from the emergence of homo sapiens through to the twenty-first century: the environmental convulsions; the interplay of ideas (good and bad); the cultural phases and exchanges; the collisions and collaborations in politics; the successions of states and empires; the unlocking of energy; the evolutions of economies; the contacts, conflicts, and contagions that have all contributed to making the world we now inhabit. Ver Descripción del producto