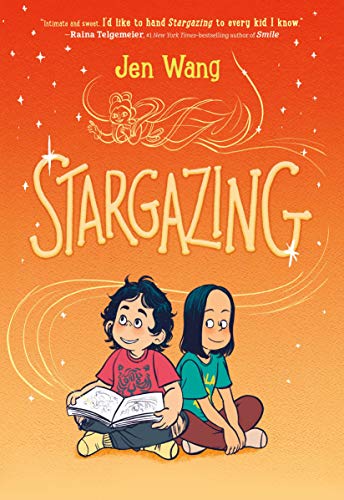 Críticas ""Intimate and sweet. I'd like to hand Stargazing to every kid I know."" --Raina Telgemeier, #1 New York Times bestselling author of Smile ""Touching, funny, and sweetly observed, Stargazing is everything a graphic novel should be. Jen Wang is a master cartoonist."" --Vera Brosgol, award-winning author of Be Prepared and Anya's Ghost ""Just beautiful. Stargazing is warm and funny and packed with shout outs and nods to the Asian American experience. It feels SO wonderful to be seen!"" --Kelly Yang, award-winning author of Front Desk ""Like a constellation, when you connect confusion, friendship, and hope, suddenly everything becomes clear. Jen Wang's Stargazing will have you laughing and crying as it takes you to the stars and back."" --Lisa Yee, award-winning author of Millicent Min, Girl Genius ""A charming tale of friendship that feels familiar and comforting. Jen Wang is a gift to comics."" --Nidhi Chanani, author of Pashmina""Wang gives her characters distinct voices while also allowing the art to speak, creating expressive, thoughtful moments... These deliberate choices lead to a dynamic story that is both hopeful and emotionally affective."" --Shelf Awareness Pro and Shelf Awareness for Readers, starred review""Wang's art is as expressive and fluid as ever, ripe with playful detail...and the muted color palette, contributed by colorist Lark Pien, casts the book in a nostalgic glow. Plumbing the depths of Wang's childhood for inspiration, this rich, heart-filled narrative will resonate with any reader who has ever felt different within their community."" --Publishers Weekly, starred review""Wang tells a story that will ring true to just about any middle-schooler who's dealt with shifting friendships, but her additional insights into navigating differences within the Chinese American community will be a balm to readers in similar situations."" --Booklist, starred review""It is so very rare and refreshing to see diversity within the Asian American community authentically portrayed; Wang allows each character complete ownership of their identity, freeing their truths and, in the process, allowing readers to do the same. A shining gem of a book."" --Kirkus, starred review""Relying on a muted palette and careful linework, Eisner Award nominee Wang has crafted an understated, poignant tale of the joy and turmoil of budding friendship...With this spot-on glimpse into the emotional landscape of tweens, Wang joins the ranks of middle grade masters Shannon Hale, Raina Telgemeier, and Cece Bell."" --School Library Journal, starred review""Every character in Stargazing is approached kindly, with an understanding of how complex people are and the sheer variety they offer. ...It's an ideal approach to a middle-grade book, and a near-perfect read."" --The AV Club""The book comes to life thanks to the vividness of its two main characters, Christine and Moon...Wang is pitch-perfect when it comes to complex relationship dynamics and the subtleties of growing up Asian in America. Her art is a supple balance of quirkiness and relatability."" --NPR Reseña del editor Stargazing is a heartwarming middle-grade graphic novel in the spirit of Real Friends and El Deafo, from New York Times bestselling author-illustrator Jen Wang.Moon is everything Christine isn't. Shes confident, impulsive, artistic . . . and though they both grew up in the same Chinese-American suburb, Moon is somehow unlike anyone Christine has ever known. But after Moon moves in next door, these unlikely friends are soon best friends, sharing their favorite music videos and painting their toenails when Christine's strict parents aren't around. Moon even tells Christine her deepest secret: that she has visions, sometimes, of celestial beings who speak to her from the stars. Who reassure her that earth isn't where she really belongs. Moon's visions have an all-too-earthly root, however, and soon Christine's best friend is in the hospital, fighting for her life. Can Christine be the friend Moon needs, now, when the sky is falling?Jen Wang draws on her childhood to paint a deeply personal yet wholly relatable friendship story thats at turns joyful, heart-wrenching, and full of hope. Ver Descripción del producto